This morning, someone in a writers' community I belong to on Google+ posted a link to this Ars Technica article about how some of the changes in the Hobbit movies were necessary to strengthen the writing. (Obviously, both that article and this post contain spoilers for both book and movie, if you care about that, and in fact assume that you're familiar with both.)

Now, even though I love The Hobbit dearly (it was one of my first fantasy reads, if not the first, and I've read it at least eight times), I agree with much of what the article says. There's too much coincidence, luck and deus ex machina in the book. However, I think some of the changes made in the movie weaken the story rather than strengthening it.

Book version: The dwarves and Bilbo, after many days of trekking through the forest, are out of provisions and almost out of hope. Bilbo climbs a tree to scout and falsely gets the impression that they are still far from their destination. In desperation, they disobey Beorn's advice and leave the path, trying to reach the elvish feasts they can see in the distance, but the elves, who are isolationists, keep disappearing as soon as they come near. They get separated in the darkness and confusion.

Bilbo wakes up from sleep being tied up by a giant spider, and kills it by a desperate effort. He luckily guesses which direction the dwarves are in, puts on his magic ring, and sneaks quietly towards them (it's been previously established that he's good at sneaking quietly).

The dwarves have been captured by the spiders. Bilbo cleverly manipulates the spiders through taunts and thrown stones to get them away from the dwarves, though he only just escapes from being surrounded by them and sneaks again to get away. He then kills another spider which has stayed behind, and begins to free the dwarves (who are in a bad way from the spiders' poison on top of their hunger and exhaustion). Before he can finish, the spiders come back, and they all have to fight. Bilbo cleverly draws them off again, and the dwarves make a desperate escape, having to fight repeatedly (with inadequate weapons) despite their weariness, hunger and the lingering effects of the spider poison. At a moment when it looks like the spiders will surround them and overwhelm them, Bilbo reappears and gives them the opportunity to escape. Bilbo fights so well and so determinedly, in fact, that the spiders eventually give them up as a bad job and go back to their nests.

The dwarves then realise that Thorin (their leader, and incidentally the only one with a decent weapon apart from Bilbo) has disappeared. He has been captured by the elves. The elves subsequently capture the rest of the dwarves as well, but Bilbo again uses the ring to escape and follows them.

Movie version: The well-supplied dwarves are having a bit of a frustrating time finding their way through the forest after what appears to be a few hours, so they send Bilbo up a tree to scout. He happily discovers that they're close to their destination. When he gets back, though, the spiders capture everyone, including him. He wakes up for no particular reason, gets himself out of a thorough binding and kills the spider with no real difficulty, and the dwarves start doing the same with a variety of effective weapons. The spiders are, individually, low-level mooks and apparently not much of a threat, but there are a lot of them. 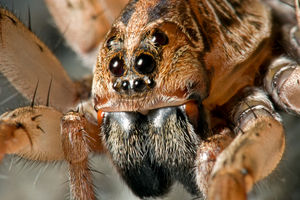 Yes, the book version uses a lucky guess (the direction in which the dwarves were), though it's really more of an informed guess. But what gets established? Bilbo is resourceful, clever and brave. He can manipulate, sneak and fight. The dwarves' situation starts out bad and gets worse, then improves thanks to the protagonist's action, then gets worse again in a different way, and that cycle repeats several times. There's a lot of desperation, for several different causes.

In the movie, all of this is lost. It's flattened out to a straightforward fight in which Bilbo is, if anything, one of the weaker players. There's no real escalation of tension, not much up-and-down movement of the tension graph at all, in fact, and most of the sources of tension (hunger, weariness, loss of hope, believing they are far from their destination, being poorly armed and weak from spider venom) are removed completely. The protagonist doesn't solve the problem. We don't get to see much increase in his abilities. He doesn't show himself to be clever, resourceful or sneaky. The result is a bland bit of action with not much significance to the story or the characters, that isn't even that exciting to watch.

Now, I didn't write this just to sling mud at Peter Jackson and his writers. I think there's something to be learned here about writing.

Turn the process around. If you have a bland bit of action with not much significance to the story or characters, here's how you can punch it up.

2. Don't just write it as "they fight a thing, they fight another thing the same as the first thing, they fight yet another thing". Write a series of problems from which the characters have to escape: One-on-one conflict. Drawing off the spiders. Spiders nearly surround Bilbo. He gets away and starts to free the dwarves, but the spiders come back before he's finished. Spiders nearly surround the dwarves, Bilbo rushes in from the side and breaks through.

I watched an excellent example of this the other day: the truck chase sequence in Raiders of the Lost Ark. It's a thrilling sequence because it's not just solving the same problem over and over, it's solving a series of different problems in different ways on the way to an overall goal (escape with the Ark). Indiana Jones must pursue the truck on horseback, jump on, force his way in, overcome the Nazis inside, then he gets attacked by other Nazis who climb forward from the back of the truck (antagonists can struggle and be brave and resourceful too), he's forced out, he climbs under the truck and is dragged behind, gets back up and in control of the truck again, has to contend with the other vehicles in the convoy (which he gets rid of by several different tactics), hides the truck in the village... It has variety, and every time he solves a problem he gets a new, and different, problem. We get a series of small releases of tension as he solves each problem, but the overall tension continues until the end of the sequence.

4. Take the opportunity for character development. If Bilbo is going to encounter Smaug with any expectation of success, he needs to be clever, resourceful and sneaky. This scene (in the book) establishes that he is becoming all of those things.

5. Have the protagonist solve the problem. Tolkien is as guilty of violating this as anyone, but not in the spider sequence. It's not fatal to have your protagonist rescued occasionally, but if it becomes a habit, they're not much of a protagonist.

6. Have the problem be more than just "do they win the fight?". Most of the fights in The Desolation of Smaug have no higher, greater or other stakes than "do the heroes win this fight?" Those are not very interesting stakes, especially when you're pretty sure the answer is going to be "yes". Will the heroes be eaten by the spiders? Will they find their way out of the forest? Will they starve? Where is their leader, and how can he escape? Can Bilbo continue to conceal his possession of the ring? All of these things are at stake in the book version, and they lead into and out of the fight, meaning that the fight is hard to remove as a story element. The movie version of the fight (and most of the other fights in the movie) could be completely removed as a story element and nothing else would need to be rewritten. That's a sign of weak writing, and a scene that isn't necessary because it doesn't do anything except present a (rather dull) spectacle.

I'll close with a link to another article: Why You Should Never Write Action Scenes for Your Blockbuster Movie. It's excellent writing advice in general, and the summary version is: Don't write action scenes. Write suspense scenes that require action to resolve.

2 thoughts on “How to Weaken a Scene”