"Release schedule," listen to me, all highfalutin'. But I do have a few things coming out this year.

In June, Cosmic Roots and Eldritch Shores will be publishing my story "Gatekeeper, What Toll?" (accessible by subscription only). It boils down a multi-volume epic fantasy series about a fated tragic hero to the essential 0.1%, by filtering it through the eyes of the keeper of a gate between worlds. 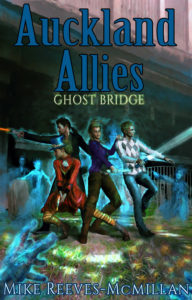 Auckland Allies 2: Ghost Bridge is all ready to go at the beginning of June. I'll be running a promotion on Book 1 as part of that launch, so stay tuned.

The contemporary urban fantasy/technothriller action continues as the Allies face a necromancer raising ghosts from a Victorian cemetery near the heart of the city. Steampunk Sally, I have to say, is awesome in this one, both when she pulls off a grift over the phone and when she... No, I won't spoil it. Put it this way: if you thought it was cool when she hit a guy with a weaponised possum, you'll really enjoy this.

I've just finished a sword-and-sorcery novella, Hand of the Trickster. It features a thief who's been blessed by his patron god, the Trickster, with the ability to "conjure" small items to and from storage in the Trickster Temple. He teams up with an ex-priestess of Wisdom, who's done something unwise; a huge man with a steel scorpion amulet embedded in his chest that makes him invulnerable; and an illusionist grifter with a warped sense of humour. Together, they pull heists on the temples of Wisdom and Justice.

Update: All going well, there will be a second book in November.

Late this year, I hope:

I've started work on Auckland Allies 3: Unsafe Harbour, and have reached 20,000 words, or a bit under halfway. At the moment I'm not sure what kind of time I'll have to work on it in the second half of the year, but all going well I should have it ready in late 2016. More magic, more technology, more body-stealing Nazis, and 100% more ninjas! (OK, there's one ninja. Not technically an actual ninja. It's Tara in a super suit, all right? Are you happy?)

I'm part of a cool project that I don't think I'm supposed to talk about yet, so I won't. But it features some authors whose work I admire, and an audacious attempt to... no, I've said too much.

My science fiction story "Taking Pro" will appear in Futuristica 2 from Metasagas Press. I read the first volume of this anthology series recently, and there are some excellent stories in it, so I look forward to the second one. My story is about what happens when scientists come up with a treatment that turns people "prosocial", and how they face the ethical and political dilemmas that engenders.

I have about 36,000 words' worth of short stories and an 18,700-word novella out on submission at the moment (counting the novelette that forms the first third of Hand of the Trickster), and hopefully at least some of that will sell at some point this year. I also have three more stories that I've already sold, but I haven't been told when they'll be published (some markets communicate better than others).

I'll let you know as things develop. Thanks, by the way, to those who voted for my story "Something Rich and Strange" in the Sir Julius Vogel Award nominations; it didn't make the final list, but as you can see, there will be plenty of material for nomination next year. Around 150,000 words of it, if I've counted right. Wow.