Leverage meets Lankhmar in this sword-and-sorcery novella, as a thief who serves the Trickster God pulls daring heists in other gods' temples.

Since the War of Gods, the high gods have grown silent and distant. The Trickster, though, is still at large in the world, humbling the exalted and exalting the humble. And the Hand of the Trickster is the thief called Now You Don't.

He and his new crew are up for any challenge, whether it's stealing a book from Wisdom's library, dealing with a dark remnant from the War of Gods, or slipping the Grim Spear of the Inexorable Hand of Justice back into the heavily-guarded Justice Temple before it can be missed.

But can they truly rely on each other? Or will a tragic secret cause their most dangerous heist to fall apart?

Available from Amazon (including on your Kindle Unlimited subscription).

"The author establishes the fantasy setting and the main character so well you just don't notice that you've been drawn into another world."

"I... was quickly transported to this time and place, and very sad to have to leave when it was over."

"Such an enjoyable and very different kind of read... I recommend this read to those who like subtle fantasy and plots that have an air of mystery attached."

"I could see the buildings of the city, hear the people in the marketplace, smell the dust or the trees, perfectly. Because of that skill and the wonderfully engaging characters, I am really looking forward to more stories in this series! Highly recommended to anyone looking for a grown-up version of The Thief, and to those who love a good heist." 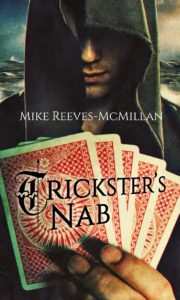 He wants to steal their money. They want to steal his memories.

The thief who calls himself Now You Don't serves the Trickster, exalting the humble and humbling the exalted. In the course of this noble enterprise, he discovers a conspiracy to recreate a magical interrogation drug, forbidden since the War of Gods for its memory-stealing side effects.

And the first people the conspirators plan to use it on will lead them straight to his family.

Tracking the source of the drug, he and his companions must battle pirates, Justicemen, and a guardian automaton in a desperate race against time. They've carried out many successful heists, but can they destroy the conspiracy before it steals from them what they value more than anything?

Available from Amazon (including on your Kindle Unlimited subscription).

Sign up to be notified when further books become available.

To be notified of new books coming out, sign up below: