See, I get bored easily, and I have an overactive imagination. (It's amazing I did so well at school, really.) Accordingly, I try things that might or might not work, to see what happens. It often produces less reliable results than sticking to what everyone else does, but it's worth it to me for the times I manage to pull it off, and it's more interesting while I'm doing it.

My experiment was this: in my novel Realmgolds, I would convey emotion not so much by using the names of emotions, but by talking about the physical feelings associated with those emotions.

Here's an example. Determined (that's the name of my protagonist) is about to speak in public, something he has avoided in the past. I write:

By the time he stood at the podium on the library steps, his anger had cooled - and so had something lodged in his gut, because it felt as if he’d swallowed a snowball...

While the square was far from being packed with citizens, they were considerably more numerous than he’d anticipated, and for a moment he wanted to back down and hand his speech to Reliable. Then he thought of Victory’s serious dark eyes and her calm daring, swallowed hard and began.

Note that I don't say at any point that he was nervous. I say how he felt physically, I mention what he wanted to do (back down and pass his speech over to someone else to give), I describe his physical response, but I don't give a name to his emotion. I also don't report his inner dialogue. I leave the reader to do a lot of the work.

There are other scenes in the book where I say more about the emotions Determined is feeling, and still others where I say less. I picked a scene as my illustration that's kind of in the middle: the emotions are there if you look for them, but you have to look, imagine, project, hypothesize.

The reason I say this is a partially failed experiment is that two reviewers have now said that they couldn't get inside the character's head, that the whole book felt emotionally distant and didn't engage them.

Now, I know as an author that I shouldn't pay too much attention to reviews, unless there's a chorus in unison telling me the same things all the time. I also know Neil Gaiman's dictum, that when people say that there's something wrong with your work they're usually right, but when they tell you what it is they're usually wrong. And it is only two people. Nevertheless, I want to improve my writing, and one of the reasons people read is to engage emotionally with the struggles of the characters. If I'm not giving them that, I want to work harder at it.

There are some other causes, of course, that could be contributing to this effect. Firstly, I'm a New Zealander of British descent, and used to being understated in my emotions. My wife is from California, and it's striking how much her level of expressed emotion differs from mine. I apply what I call the "Reeves discount" (Reeves being her family name) to bring it into what I consider a "normal" range, to translate it, to scale it so that I can tell how upset she is in terms of the level of emotional expression I grew up with. It's a large scaling factor. 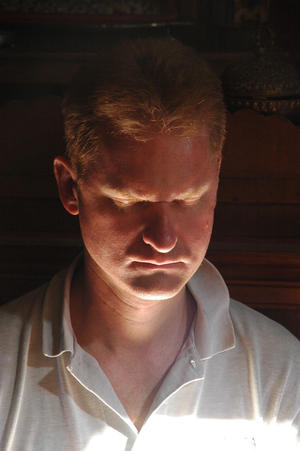 I'm also a meditator, practicing techniques that make you emotionally very even. People I work with, people from my own ethnic background, have remarked on how I "don't get upset easily". In the book, Determined practices similar techniques.

Also, I'm not all that experienced at writing in third person, though I've read plenty of it and that's not much of an excuse. (City of Masks was in first person, and Gu in second person. Yes, that was another experiment.) Even when I do read third-person narratives, though, I quickly grow tired of the ones that patter on with the character's internal dialogue for pages, so that when something happens or someone else speaks you have to page back to remind yourself what happened or what was said last so that you can pick up the thread. I may have overcorrected for that.

It's probably a combination of factors. My experiment, my own ethnic and personal background, my fiction preferences, the fact that sometimes not everything in my head makes it onto the page, some kind of missed connection with those particular reviewers so that they didn't notice the emotional cues that were there, or dismissed them, who knows what else. The important thing is that for Hope and the Clever Man, I'll be asking myself as I revise each scene, "How does she feel about this? And how does the reader know?"

I'll try not to overcorrect the other way and make it into a constant description of Hope's feelings, though.

One thought on “Getting Inside Characters’ Heads”