The year just gone hasn't been as productive, in terms of word count, as the previous year. This is because in 2016 I was laid off at work in May, and didn't start a new job until October, giving me six months to effectively write full-time. I discovered I can write a lot in six months.

I also haven't written, or submitted, nearly as much short fiction this year, because I've been spending what writing time I had on novels. This is largely because my deal with Canadian-based small press Digital Fiction to take over publication of the Gryphon Clerks series has made my novels more profitable, and hence more attractive to work on; but it's partly been a mood thing, too. I write what I'm motivated to write, which is sometimes novels and sometimes short stories. This was a novels year.

Consequently, my short story submission figures for this year are way down, because I wasn't writing new stuff. I also pulled a number of my stories out of submission to work on them some more, and then ended up not doing so. I joined Codex, a forum for "neo-pro" writers, last year, and while the critiques I've received there have been all kinds of useful, by the same token they've clarified to me some of the issues with the stories I haven't sold yet, and I haven't quite puzzled out how to fix them.

I did sell a few stories, though, mostly reprints of ones I'd already sold somewhere else, and I reached the milestone of 200 total submissions (spread over 6 years). Here are my figures for the year, compared with previous years:

I did get some writing done. My fifth Gryphon Clerks novel, Mister Bucket for Assembly, which I was originally going to self-publish in late 2016, ended up coming out as the first all-new publication I had with Digital Fiction, appearing in May 2017. That wasn't Digital Fiction's fault, or even, really, because I published it with them rather than doing it myself; it needed a lot of structural work, including tearing out a whole storyline that wasn't well integrated with the main plot. I do plan to publish those "deleted scenes", probably in 2018 sometime, as part of a (slightly? much?) larger book that follows the human characters from the Hope books and wraps up parts of their stories. It will take place over the timeframe of Mister Bucket and probably a bit beyond.

That's how the Gryphon Clerks books tend to work: it's a big world, even the small part of it that I've explored so far, and three of the novels already take place at overlapping times, with different groups of characters that occasionally intersect. (That's Realmgolds, Hope and the Clever Man, and Beastheads, all of which take place in part during the brief Unification War.)

Here's a timeline, in case you're confused: 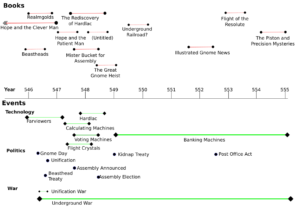 You'll notice on there a book called Illustrated Gnome News. If you've read Mister Bucket, you'll probably recognise that as the name of the gnomes' newspaper, founded to support Bucket in his campaign for election. That's the book I'm working on at the moment. The third draft has gone off to my development editor; it's a monster, currently at 115,000 words, which is my longest book yet (Bucket is second, at around 90,000). It seems to grow by 5000 words each time I revise it. But I feel like I'm finally getting a handle on writing a long, multi-threaded, multiple-viewpoint novel with a unified theme explored from different perspectives.

Illustrated Gnome News follows some of the younger gnomes from Mister Bucket for Assembly, a couple of years later, as they struggle to figure out how to live in a world where gnomes are now free and not subject to the old constraints imposed by the dwarves - but where a lot of gnomes, particularly older ones, go on living by those rules, because that's what they've always done, and they're outraged at the idea that younger gnomes might depart from them. It's a confusing and challenging time for everyone, and the newspaper has to balance between being a voice to move gnomish society forward, and a business that can afford to keep operating. To make matters worse, some of the debt that Mister Hammer, the paper's owner, has had to take on has fallen into unfriendly hands, which could result in ruin not only for him but for other gnome businessmen. It's never been more important for gnomes to pull together, and yet they're more openly at odds than they've ever been.

And into the middle of all this I drop a romance that is very much not in the approved gnomish manner, and that's threatened by social expectations and economic realities alike.

I'm not willing to give a more precise estimate than "first half of 2018" for publication, but I think it'll be worth waiting for. Stay tuned.

I've also started a new Gryphon Clerks project. I'm not sure how long it will end up being; it's a set of three linked stories featuring a pair of gnomes, a Realm Agent and a woman engineer, who solve technological crimes together. Working title is The Piston and Precision Mysteries. It's set a few years later than Illustrated Gnome News, and Piston is a minor character in that novel.