I just wanted to stick my head up and let everyone know that I am still alive and writing, even though it's more than a year since Mister Bucket for Assembly was published. In fact, there's a lot more on the way from the Gryphon Clerks; nearly a quarter of a million words.

You may remember that I've moved from self-publishing the Gryphon Clerks series to a small press, Digital Fiction, based in Canada. That's going well, but they're a very small press with a surprisingly large number of authors, and things have got a bit backed up temporarily.

Also, my development editor, who I've worked with for years and learned a lot from, has had to give up editing because of life circumstances. Those same circumstances led to a delay in the completion of the sequel to Mister Bucket for Assembly, which is entitled Illustrated Gnome News, and is currently in Digital Fiction's queue for publication.

It's my longest yet, at 115,000 words; it needed to be long to fit in five plots (mystery, romance, coming of age, saving the family business, and justice for the oppressed) and multiple viewpoint characters. I'm very happy with it, and I think readers will enjoy it too. Here's the blurb:

They may be putting out a newspaper, but there are some things they don't want becoming news.

The Illustrated Gnome News is the only newspaper serving the newly emancipated gnome community, but there are days when Ladle, the paper's overworked editor, thinks that's because nobody else is stupid enough to try to run one. She walks a delicate line between not scaring off all their advertisers and still putting out a paper that stands for a better future for all gnomes - including those gnomes who don't match up to traditional ideas of what's proper.

One of these is her friend Loom, the first gnome woman to qualify as an engineer. But Loom has a secret that would shock conventional gnomes even more than that, and must somehow find a way to pursue her own happiness amidst the wider struggle to turn gnome emancipation into true freedom.

Content advisory: This book depicts a romantic and sexual relationship between two women (without explicit scenes).

While I was waiting for my editor's notes on IGN, I wasn't idle. One of the minor characters in Illustrated Gnome News is a keen young man who wants to be a Realm Agent (think FBI, with appropriate adjustments for technology and society). He ended up starring in the next book, Capital Crimes, which is also in Digital's queue.

I hired a new editor for Capital Crimes, the talented, celebrated, and award-winning Karen Conlin, who told me repeatedly that she all-caps LOVED it. She'd never read any of my books before, and found it entirely comprehensible, so I can tell you that it's a good place to start the series; it's the first of a sub-series of books about the Realm Agents, in more of a mystery/thriller style. Here's its blurb:

The new capital of the human realm of Koslin delights in the latest technology, and the emancipated gnomes who build and maintain it.

Precision, one of the first gnome women to qualify as an engineer, and her almost-brother Piston, the first gnome to join the elite Realm Agents, uncover a plot to subvert the infrastructure of the city, steal its technology, and crash the economy. To thwart it, they must enter the place a gnome fears most: an unreformed dwarfhold, where gnomes are still bonded servants.

Also! Back when I was revising Mister Bucket for Assembly, my editor quite rightly suggested that I should take out about 30,000 words about what was going on in the lives of the humans, since it didn't have any direct impact on the main plot. I kept those 30,000 words, though, and (with a bit of revision) they will form a new novella, initially exclusive to my mailing list, though I may release it more widely later on. It's entitled Hope Persists, and includes some important changes for Rosie, the Clever Man, Hope and Patient, tying up some threads from Hope and the Patient Man.

All of this is coming in the future, at dates yet to be announced, but there's one Gryphon Clerks story that's newly available now. (Strictly speaking, it's previously been published in a couple of anthologies that hardly anyone bought, brought out by a publisher who's now vanished off the face of the earth; so it might as well be new.) It's a short piece called "Intrusion," which takes place during Hope and the Clever Man - the other side of the incident in which the dwarves take over the farspeakers to broadcast anti-gnome propaganda. The reason I'm re-releasing it now is because it's relevant to events in Capital Crimes, in which the two main characters resurface. 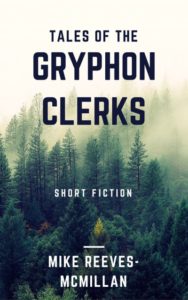 I've added it to my Tales of the Gryphon Clerks collection, which is a benefit for joining my mailing list. That's also where you can be sure to hear about release dates for the other pieces I mention above, so if you're a GC fan, make sure you're subscribed.