Today I'm launching the first book of my new series, Realm Agents, set in the world of the Gryphon Clerks. (Amazon links in this post are affiliate links.)

I've decided to call it a new series, even though it features characters from earlier books and takes place in the same setting, mainly because it's a genre shift. Really, what it is is intensifying a few elements that were already present; there have been action scenes, mysteries, and steampunk/magepunk technology in previous books, but I'm now moving them up front and calling the result a secondary-world fantasy steampunk techno-thriller. 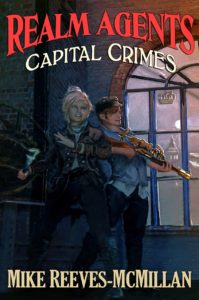 In a techno-thriller, the technology itself plays a key role, and that's definitely the case here. The first book, just released, is called Capital Crimes, and is set in the new, modern capital of Koslin: New Koslinmouth. Part of the "new series" aspect is choosing an area of the setting that I haven't explored much before, though we did get a glimpse of it in Illustrated Gnome News. Part of the "techno-thriller" aspect is that it's literally a new part of the setting, built with leading-edge technology as the planned capital of the newly united realm.

New Koslinmouth is home to semi-automated trams, freight pods running beneath the streets, a port for skyships using a magical navigation system, and, above all, the Realm Ledger - a huge primitive computer, running on punched cards, cogs, light, and magic, through which most of the realm's business is transacted. (Rosie Printer comes up with the idea in the novella Hope Persists, available as a bonus to my mailing list.)

The thing about new technologies is that they can create losers as well as winners, and the losers created by the Realm Ledger - as a matter of quite deliberate policy - are the dwarves, who formerly were the people you had to deal with if you wanted to do anything related to finance, banking, or currency. Now that the realm of Koslin is in a low-key economic war with the dwarves, that couldn't be allowed to stand. But that makes the Realm Ledger a huge target for those dwarves who are especially... direct in the way they conduct their business.

Standing against them are the courageous Realm Agents, including Agent Piston, who we first met as an eager youth in Illustrated Gnome News. Despite his gnomish heritage, he doesn't know much about technology - that's part of why he joined the agents - so when someone starts stealing from the freight tubes, he consults an old school friend, Precision, one of the first gnome women to become an engineer.

As the scope of the crimes they're investigating escalates, they're going to have to go where no gnome willingly ventures - into an unreformed dwarfhold, where gnomes are still effectively enslaved.

I believe I've increased the action and tension, compared with earlier books, while not losing the elements of character and setting that my current readers enjoy. I've also created an entry point for new readers; my new editor (who enjoyed it hugely) hadn't read the previous Gryphon Clerks novels, but she found it easy to orient herself to the world. Think of it, if you like, as a standalone novel with bits of backstory that just happen to also be frontstory in other books.

I've very nearly finished the first draft of the sequel, Underground War, also set in New Koslinmouth and featuring Piston and Precision, along with other characters old and new. Briar Heathlake, my personal favourite of all the Gryphon Clerks characters, has a minor role; her gentleman-friend, Leading Agent Active, is more central. And I have reasonably well-developed ideas for a third book, this time taking place in the even higher-tech setting of the Research Institutes (established in Mister Bucket for Assembly). After that, plans are indefinite; it will partly depend on how popular the series is. I have fun writing them, and I think lots of people will have fun reading them if they find out about them - so tell your friends!

You can get Capital Crimes at Amazon; I'm putting it up initially at 99c for a short while, to get momentum at the launch. It will revert to the usual $2.99 after that, so get in quick.